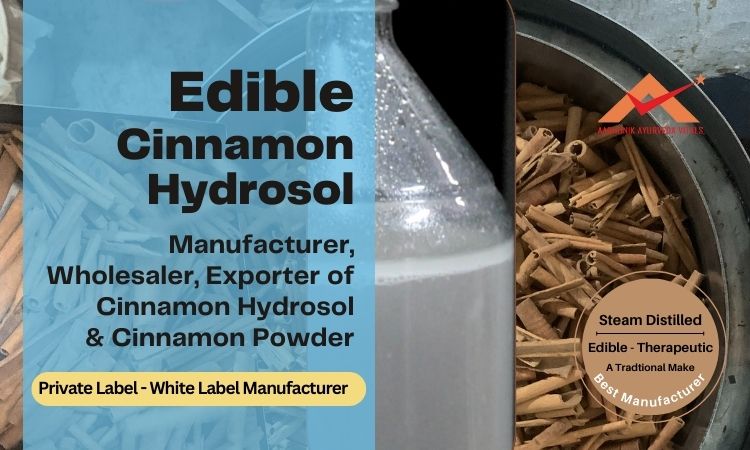 Cinnamon, also known as dalchini in Hindi is a delicious and powerful spice with effective medicinal benefits. The unique aroma & flavour makes the herb widely used in the kitchen.

Aadhunik Ayurveda provides the best high-quality pure Cinnamon hydrosol, which is highly potent and therapeutic and rich in antioxidants that fight off free radicals and protect the body from diseases. You can also use cinnamon hydrosol in diffuser/tea drops - aromatherapy to help relax muscles. 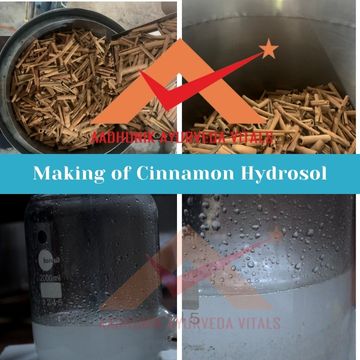 Aadhunik Ayurveda manufactures cinnamon water for its therapeutic value to the skin, body and mind. We take a handful of cinnamon sticks to produce a few drops of its water. Purely an ancient technique called steam distillation is practised to ensure no chemicals and preservatives are used. 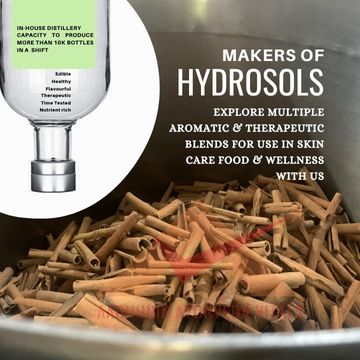 Aadhunik Ayurveda is the leading manufacturer, supplier, and exporter of cinnamon hydrosol from India. Our company owns a state-of-art manufacturing facility where varieties of hydrosol are processed while making sure that they do not lack nutritional content.

Aadhunik Ayurveda is the fastest-growing hydrosol manufacturer and hydrosols private label company in India & globally. We employ numerous tests and quality checks to ensure that only premium-quality and pure hydrosol reaches you. The highest packaging and quality standards are employed to deliver desirable results on usage. Every hydrosol batch produced is tested for different parameters like pH, nutritional profile/composition and microbiology before dispatch to brands.

With our commitment to client satisfaction, we go beyond conventional boundaries to provide 100% natural organic cinnamon hydrosol. We value customer delight and keep the great quality, purity, and natural characteristics of our provided pure cinnamon hydrosol intact. Our products are free from all chemicals, & harmful substances. Moreover, we check them time-to-time to ensure you get no chance to complain.

Aadhunik Ayurveda is an ISO, GMP, USDA, and FSSAI-certified company in India. So if you want to buy edible cinnamon hydrosol from manufacturers at a reasonable price, you are at the right place. We offer 100% pure and natural cinnamon hydrosol in India.

Where to buy Cinnamon Hydrosol?

Can I purchase Cinnamon Hydrosol in Bulk?

You can order Cinnamon Hydrosol in bulk at Aadhunik Ayurveda Vitals. We also export this Hydrosol to many skincare, & wellness brands around the world.

Is it good to consume cinnamon tea?

It is a powerful beverage filled with antioxidants and offers several health benefits, as it may reduce blood sugar levels, & improve heart health.

Is the cinnamon hydrosol edible?

Aadhunik Ayurveda’s produced cinnamon hydrosol is edible as this is truly a steam distilled hydrosol.